Indeed, we take a lot in the modern world for granted, losing sight of the main mechanisms that govern our lives.

Day after day, we perform the same food-related rituals without noticing their effect on us as city dwellers. For example, takeaway food existed 5,000 years before us on the streets of Ur and Uruk, the oldest cities on Earth. Markets, shops and cafes form the urban space in which we exist.

We treat food lightly, not caring about how many thousands of miles by sea or air this or that food product has overcome, how many dozens of hands have touched it, while in the pre-industrial era the townspeople knew everything about food. 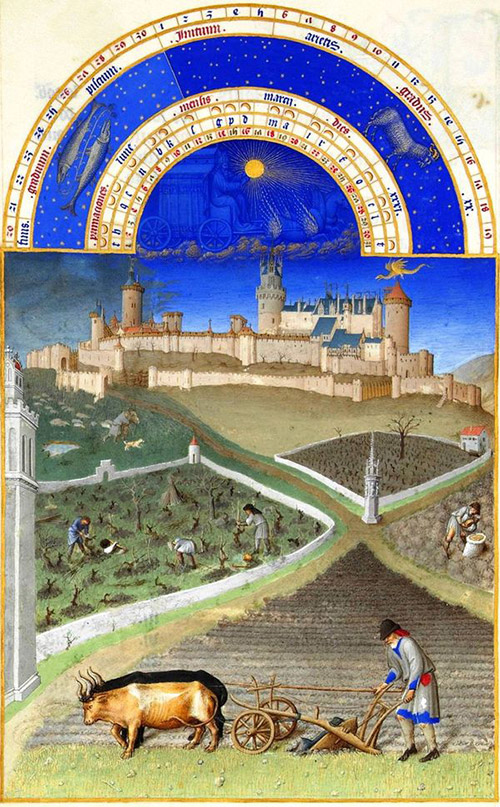 The roads were crammed with carts and wagons loaded with grain and vegetables, the river and sea ports were filled with cargo ships and fishing boats, cows, pigs and chickens roamed the streets and yards. A resident of such a city could not help but know where food comes from: it was around, grunting, smelling, getting underfoot.
Once upon a time, eating meat for dinner was a luxury. 12,000 years ago, the glaciers retreated north. The migration of large animals and population growth forced people to change their eating habits from a meat diet to a grain diet.

Grain freed man, but at the same time, its cultivation doomed people to a life full of tireless work, which was regarded as a divine punishment.
The village and the city had an equal status, as the townspeople perfectly understood who fed them. Areas such as fields and vineyards were honored on a par with city streets and buildings. Respect was expressed in the way the place for the founding of the city was chosen, in a series of rituals and ceremonies, in sacrifices. The fruitfulness of the earth was not something taken for granted. She had to be earned.

I recall miniatures from the Magnificent Book of Hours of the Duke of Berry (a cycle of miniatures on the theme of “The Seasons”, the authors of which are the Limburg Brothers). Respect and love for agriculture survived into the Middle Ages.

Such an attitude to agriculture could not but evoke mutual respect and honor for the Earth in general, for those who own it. Carolyn Steel paints pictures of feudal England. Why did feudalism collapse? No, not because of the numerous uprisings of the peasants, but because of inefficiency. With such a system of land tenure, it was impossible to develop large cities.

When did cities begin to be associated with “civilized” life, and villages, on the contrary, with “primitive” life?

This trend was observed in England during the Tudor era, when social life began to focus mainly in the city. There was some disregard for rural life with its barbaric and rough occupations, but as the cities grew and became polluted, attitudes towards them changed for the worse. This is evidenced by the speech of the Bishop of Worcester (1548):

If the plowmen in the countryside were as careless in their duties as the prelates, we would all very soon die of starvation.
The more luxurious cities became, the more suspicious became the rural population, which supplied these cities with food. Recall an excerpt from Jack London’s story “The Power of the Strong”:

“The time will come,” he said, wiping his fingers on his thighs, “when the fools perish and the rest go forward. Nobody will fight each other. People will forget about warriors and guards on the walls. They will destroy predators, and herds of sheep will graze on the slopes of the hills, as Hairy foretold, and corn and root crops will be grown in the mountain valleys. All men will be brothers, and there will be no couch potatoes left to feed.”
So, urban sprawl and industrialization lead to a division between the countryside and the city, between producers and consumers, between natural food and food that comes to our table.

The habit of semi-finished products affects not only our health … If a person does not cook, he does not go to the local store for groceries, does not understand where food comes from, does not control what enters his body, does not know how the structure of his diet affects the environment planets.
Nutrition is a culture and a certain degree of responsibility, and not a blind absorption of food, a primitive satisfaction of primary needs. Using the example of his parents, Steele shows that events such as World War II gave people useful knowledge: what season certain vegetables ripen, what to do with goose giblets, and how to determine the ripeness of fruits and the freshness of meat.

I, like many people my age, feel that the parental horror of throwing away and spoiling food was partly transmitted to me.
In the chapter “Trash Trophies”, Steele describes the modern still life: “beautiful but uneaten peaches and trash cans full of perfectly good food: something is amiss in the realm of modern gastronomy.”

However, there is a way out! Steel encourages everyone to start small.

Steele says that, first, we need to associate the beans on our plate with the person who raised them somewhere, the chicken in the sandwich with a live bird, and the taste, texture and color of food with the weather and season. Secondly, one must overcome the fear of the countryside as something crude and barbaric.

Food is the messenger of the village, a living part of the area where it is grown. Therefore, eating what is grown recently and nearby is not only environmentally expedient, but also much more pleasant … Among the best dishes in the world are those that Italians refer to as la cucina povera – “the food of the poor.” They are exceptionally delicious due to their simplicity and the fact that they are prepared with local, seasonal produce.
Steele conveys these and many other solutions in his book about humanity and its changing eating habits, as if telling us that it is never too late to change and become better, starting, for example, with food.