European artists began using canvas in the 16th century, and later it became so popular that old icons were transferred onto it.

Then they used two types of canvases – linen and hemp. Until the 18th century, hemp canvas was mainly used.
Artistic digital printing is the printing of reproductions of works of art, as well as printing high-quality photographs on canvas. It originated in 1985 in the USA. At first, traditional offset printing, silkscreen printing and photogravure techniques were used to produce large-scale images. But, it was quite expensive and required a significant investment of time and resources. Modern digital technologies make it possible to produce a quick and inexpensive print in a single copy.
This technology, called the term “giclee”, was adopted by many photographers, printers and artists. For them, this was an incredible progress, because in this way they could replicate their works, in addition, such a printer allowed high-quality, high-resolution large-format printing. Some consider giclee to be a digital equivalent of an artwork, printed on canvas and lightly drawn by the artist. Others consider giclee to be a limited number of printed copies signed by the artist. Also, there is a third option, according to which “giclee” are digital prints printed on a special high-quality printer.
The term “gicleur” itself is translated from French as “jet”. Let’s take a look at history to understand this issue.
The pioneer of high-quality art printing can be traced back to musician Graham Nash, who began scanning photographs in the early 1980s to create a digital collection. Over time, he realized that it was impossible to print a good large photo from a digital copy, because the pixels were too large. But soon Nash learned about inkjet printers called Iris from Iris Graphics, which began to be used for art printing. This printer was the first to print on silk, linen, paper, and also on canvas measuring 34×46 inches or 86×116 centimeters.
Before the advent of these printers, many people believed that reproductions of paintings could only be made using lithography, silkscreen printing, or photogravure.

He also created digital imaging software and furthermore improved the Iris printer to produce prints on high quality watercolor paper. But, unfortunately, there were problems in adapting the printer to canvas and photo paper, as well as problems with ink, which very quickly lost color. Fortunately, in 1994, pigment-resistant inks appeared, designed for printing on paper materials, including canvas, which solved this problem and made art printing on canvas a new type of printing.
In March 2001, the Whitney Museum of American Art hosted an exhibition highlighting the importance of digital technology in American art. This was the first event to include a display of multiple digital prints. 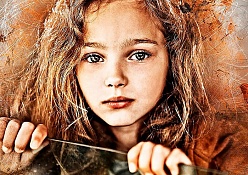 Three months later, in April 2001, the Brooklyn Museum hosted an exhibition exploring the synthesis of digital computing and printing processes called Modern Digital Printing. This exhibition showcased 84 traditionally printed but edited or generally computer generated works. Among them were works by famous artists, including works by John Baldessari, Jim Dine, Ann Hamilton, Chuck Close, Robert Rauschenberg, and others.
Today, digital prints are part of the collections of the Metropolitan Museum of Art in New York, the Museum of Modern Art, the Whitney Museum of American Art, the Corcoran Gallery in Washington, and the Art Institute of Chicago.