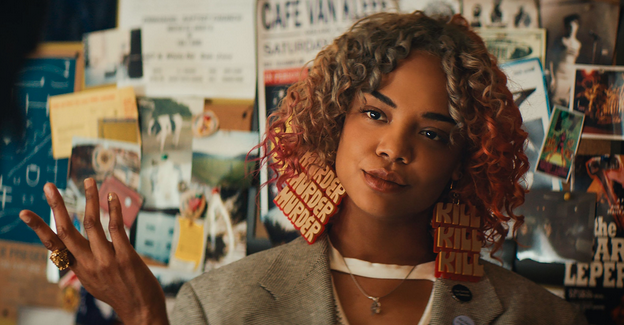 I’ll admit that I was at first dazzled by the strange combination of ethereal bangles and beads and the NeonEjaculate artistic flair of curb-stomping stubbornness that is the lead, Detroit (Tessa Thompson), in the film Sorry to Bother You. She flits about like a fairy in a concrete jungle as she twirls a sign and looks every bit the part of a spirited and innocent being. This has led to complaints of her validity as a fully fleshed out female character.

I believe this speaks to laziness in the analysis of the critics. In spite of her screw you! jewelry and lip glitter that is designed to attract and distract, I hate to break it to you: Detroit is imperfect. It’s that imperfection that shatters the rose glass that typically surrounds a female character accused of being a manic pixie dream girl, or whatever combination of adjectives one might use to describe a female character that is simply too good, too quirky, and too alluring to be true. Many articles written recently appear to have forgotten that we are witnessing two leads in this story, not a lead and his lady. What about the perils of Detroit-ism? We can learn from her conflict, as her double consciousness is every bit as fascinating as Cash’s. While it is easy to be distracted by Tessa Thompson’s beauty, Boots Riley has truly created a character worthy of analysis beyond her obvious qualities. Detroit is more than a girlfriend, she is more than an activist, and she certainly deserves more than flaccid acknowledgment in reviews focusing upon what we can only glean from Cassius, her co-star (Lakeith Stanfield).

Her narrative is seemingly in parallel with Cassius’ because they are complete opposites. While Cassius is actively seeking to better himself by selling his soul using his body, Detroit is attempting to sell her body to be used as a canvas for socio-political activism with her soul intact. I would argue that their narratives are not in fact in parallel, but that their struggles meet somewhere along the way at that perpendicular point of weakness: that point where integrity is sacrificed in the art of getting by.

Both characters choose a path that is safe for them. Cassius seeks security through physical wealth. Detroit falls behind her wall of impenetrable womanhood as she barks an obscure recited film quote to a crowd of consumers while being pelted by cell phones, bullet casings, and water balloons. She wears her performance in her daily life. She knows that her armor is her identity and, although she might appear to be in bodily danger running from the police, the film still shows her being supported and encouraged by her peers and other characters. She is largely in a sanctuary of aesthetics and justice. I struggle to see the risk she is taking as the film presents her escape after tagging a building in protest and she’s grinning like a mad woman. Obviously incarceration for a black woman in the real world is something that inspires anxiety and can lead to great harm, but upon examining this microcosm of the film, the message about Detroit appears very different. She receives validation and appears to face very little adversity in the film, which in this strange universe implies to me that her activism is something she feels safe and comfortable in. In her attempts to remain in this world without confronting the grey areas of artistic activism, she is not so different from Cassius. While the apparent moral high ground splashes her with the paint of a manic pixie dream girl, in reality, she’s possibly as problematic as Cassius. We ignore this fact because she is cast in a moral light. Rather than being definitively on one side of morality along with Squeeze (Steven Yeun), the selfless rabble-rouser, I believe that Detroit falls somewhere between Squeeze and Cassius, which is ironic given her attraction to both. Detroit is paradoxical and hypocritical: and that’s exactly why she’s human.

Cassius lashes out at one point in the movie and states that Detroit’s work is purchased by rich white people. This line stands out to me because before Detroit’s performance on stage, her tone and manner appear similar, at least to my ears, to that of Cassius when using his “white voice”. This white voice is even more contrived in this instance as she’s using a British accent. Although hidden behind a layer of seemingly good intent, she’s certainly every bit as charming, gracious, and upbeat as Cassius is when selling a better life to his customers. She schmoozes along with the best of them. She is performing in order to pander to an audience. Without them, this particular performance piece is useless.

Detroit is strong and unapologetic, but she’s also desirable. For these reasons some critics have compared her to a manic pixie dream girl. At first, I felt similarly disappointed. She completes a love story by reuniting with Cassius in the end, and her story completes Cassius’s narrative journey, not her own. However, there is an element of the narrative giving the middle finger to convention in its very basis. So, is it a happy ending enveloped in irony? Upon further thought, perhaps both Detroit and Cassius have experienced an Icarus-like humbling together, as true leads side by side, which says to me that Detroit most certainly holds her own as a flawed character facing her own journey of self-discovery.

On some level, it appears that Detroit recognizes her own stereotype. Upon being asked how she and Cassius can remain a couple when she’s the pop art and he’s the minimalism, she expresses admiration for his simplicity. She recognizes that art and persona is, to an extent, a mask for herself and other artists. She learns this lesson through battle under stage lights and returning to a version of the simplicity which both she and Cassius started with. Although they both return, Detroit has slain a dragon in her own right. While critics might condemn her character to a stereotype, I would argue that Sorry To Bother You is not presenting a one dimensional dream girl, but a detrimentally human one—detrimental not to Detroit as representative of a real woman, for she is that and then some— but to film goers’ assumptions that life-like contradiction in a female character must be obvious upon first glance.

Image from the film Sorry to Bother You (2018), dir. by Boots Riley

This site uses Akismet to reduce spam. Learn how your comment data is processed.